Home » Financial News » A Nickel for Your Thoughts?

Americans reject abolishing the penny and making a dollar bill into a coin.

In the broad scheme of ways our government wastes money, minting new pennies may seem pretty harmless… Until you realize that the cost to mint a coin for $0.01 actually costs the government $0.166 for each coin minted. So we’re actually spending money to make new pennies every year. 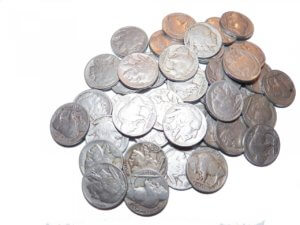 On a positive note, that extra cost is a least reduced from previous highs. In the fiscal year 2011 when we were still in the throes of the recession, it was costing the federal government $0.0241 to mint every penny. Still, it begs the question that if we can’t mint pennies for less than their value, why are we minting them at all?

However, in the latest Harris Poll of 2,273 U.S. adults, 51% of people still feel like we shouldn’t abolish the penny. The trends in this poll do show some progress – the previous poll had 56% of Americans rejecting getting rid of our most humble coin, and people who favor abolishment has increased from 24% in the last poll to 29% in the most recent.

Given the extreme measures our government has gone to in recent years to improve the economy, such as military sequestration and government shutdowns, it seems odd that we’re wasting money to mint money.

Think of it this way – if the federal government was a household with a debt problem that went through credit counseling, one of the first things a credit counselor would do to help that family get their budget back on track would be to identify close spending leaks.

A spending leak is anywhere in your budget that you’re throwing money away when it could be saved. This includes things like expensive gym memberships you never use or daily trips to the coffee shop when you could be brewing at home. In the case of the federal government, if the cost to produce a coin is higher than the value of the coin itself, then it should be a no brainer to fix the system. Instead we’re keeping the penny around for the sake of nostalgia or tradition.

Doubling the cost of a dollar?

The same poll asked about the idea of converting the dollar bill to a coin. The vast majority of us (80% of respondents) prefer to keep the paper. However, unlike the penny debate, this really comes down to convenience for users. On the other hand, if dollar bills were made into dollar coins, it might cost more. A dollar bill costs $0.049 to print per note. By contrast, a quarter-dollar coin costs $0.0895. So switching the system would double the cost – not the best idea for if we ever want to achieve a balanced federal budget.

This National Preparedness Month, Protect Your Wallet from the Weather