Even though many experts believe the recession is done, Latinos continue to stress about unemployment and foreclosure. 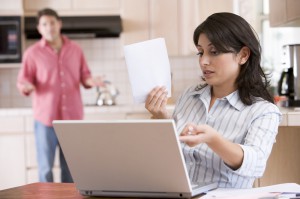 The unemployment rate recently dropped to 6.1 percent, a five and half year low, according to the U.S. Bureau of Labor Statistics. That may be a cause for celebration in some circles, but not in the Latino community.

According to a new poll by Latino Decisions, a leader in Latino political opinion research, 53 percent revealed “they are very or somewhat concerned” a person in the household would become unemployed. And one-third were concerned their home would be taken from them due to foreclosure. But it’s not all bad news.

Despite the strain of economic issues hovering over the Latino community, they still have faith in the American Dream. When asked what that dream consisted of Latinos answered:

But there are roadblocks preventing them from realizing the Dream. Most Latinos, 67 percent don’t think they make enough money to cover daily expenses, and 65 percent fear their job does not offer chances for advancement, which lowers their odds of buying a home.

“There are opportunities for Latinos and others to receive housing counseling, which will give them professional advice on how to shop for a house and qualify for the best mortgage,” says Gary Herman, president of Consolidated Credit. “Many first-time buyers that aren’t familiar with the intricacies of the housing market benefit from counseling and they can also learn how to build a budget so saving for a new home becomes more efficient.”

Making the most out of what you make

A majority of Latinos would vote for a politician who is in favor of raising the minimum wage (55 percent). That reflects the mostly stagnant growth of the community’s financial situation. Only 37 percent said their finances improved during the past five years, while 25 percent said “they got worse.” Thirty-seven percent said things didn’t change at all.

“There are ways of making the most out of what you make,” notes Herman. “Taking advantage of free financial tools and learning new money saving strategies can help people stabilize their finances, and relieve the burden that money-pressures place on them. But it’s not easy. It takes discipline and knowledge. The first step is starting to educate yourself.”

Hispanic Americans are often underserved by traditional banks, but many credit unions are stepping up to provide access to financial products...Read full article