Home » Financial News » Filling Up More Than Your Tank

New research shows just how much you save when prices drop. 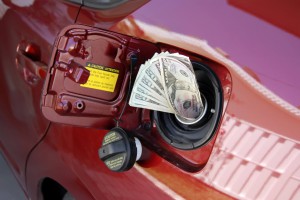 Cheap gasoline can really fuel your finances. That’s the conclusion of a new study by JP Morgan Chase, which found cheap gas benefits middle-income families the most.

So those pennies at the pump really add up. For low-income families, the savings are even more dramatic…

Households earning less than $30,000 annually benefited the most—their saving from lower gas prices of $332 was the equivalent of a 1.4 percent boost to discretionary income.

What is America doing with this cash windfall? Not what Consolidated Credit president Gary Herman suggests: “Paying down debt is a way to stretch your dollar – because if you have credit card balances, you’re paying interest each month. Every dollar you save, you can tack on another 15 percent, which is the average APR right now.”

Herman urges Americans to save this brief windfall.