If so, you got company – about 17 million other Americans.

Republicans and Democrats have many differences. Here’s another: Republicans are nearly twice as likely as Democrats to spy on the credit cards statements of other people.

That’s just one of the weird results from a new poll from CreditCards.com, which conducted telephone interviews with 827 adults. They wanted to see how many people have “snooped on the spending habits of someone with whom they share a credit card account.”

Almost half of the 86 million joint credit accounts in the U.S. are shared between spouses and partners. Most of the rest are shared between parents and children. Overall, 20 percent – 17 million people – “admit to sneaking a peek at another person’s spending” without them knowing about it.

“Republicans are almost twice as likely to spy on spending as Democrats,” the survey showed, by a margin of 25 to 14 percent. Regrettably, CreditCards.com didn’t explore the reasons for this. However, it did delve into the incomes of peekers…

The highest and lowest income brackets are equally likely to peek (24 percent). That includes annual household incomes of $75,000-plus and below $30,000, respectively. Just 14 percent of those with incomes between $30,000 and $74,999 have checked on another accountholder’s spending.

Is such spying morally wrong? Not according to Matt Schulz, CreditCards.com’s senior industry analyst.

“When you share an account with someone, it’s important to know what the other person is doing,” Schulz says. “Ideally, you’d talk frequently and openly with the other person, but if that doesn’t happen, checking in on your fellow accountholder’s spending can help you sniff out problems before they get out of control.” 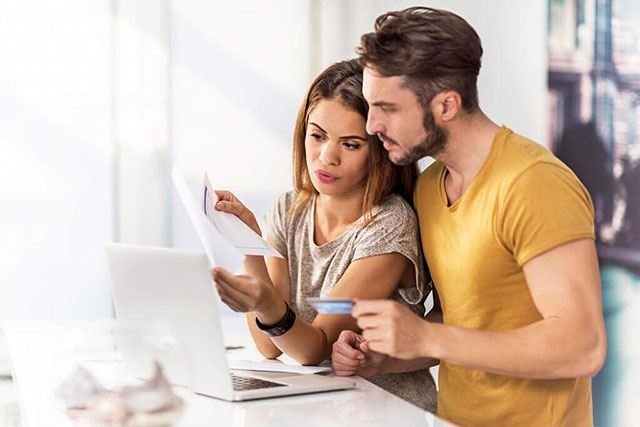 Financial infidelity commonly refers to taking financial actions in secret without a partner’s knowledge, such as opening a secret credit card account. However, spying on a partner’s spending habits through a joint account is almost a type of reverse financial infidelity. And it’s one that Consolidated Credit president Gary Herman insists there’s no need for. Instead, couples need to be open and honest, having regular discussions about finance so there is no need for secret spending or snooping.

“Financial infidelity is a problem because you both need to be on the same page when it comes to achieving financial goals,” Herman says. “We’ve reported that 1 in 3 adults admit keeping money secret in a relationship. That can ruin not only your finances but your partnership.”

Herman suggests reviewing credit cards statements every month together, to ensure you’re following your budget. If you find yourselves with an alarming amount of debt, you can call a certified credit counselor at 1-888-294-3130 for a free debt analysis – which you can also do together.

Find short and long term tips for getting through coronavirus shutdowns, plus get updates on government relief efforts, free resources and avoiding scams...Read full article

Overspending for Credit Card Rewards You Never Use

Studies show that consumers use charge more to earn credit card rewards, but often never do anything with them. Find tips for refining your credit strategy...Read full article