Age, income and educational are factors in who does and doesn’t save. 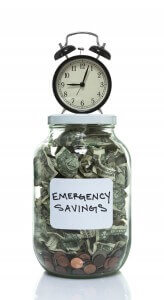 Life rarely goes as planned and if it did we wouldn’t have to plan for emergencies. Unfortunately unforeseen circumstances are inevitable, which is why it is important to be financially prepared for them. Yet, a new report by Bankrate says only 38 percent of Americans have enough money saved for an unexpected expense like an emergency room visit or car repair.

Although the majority of Americans are failing to stash away cash, those most likely not to save for unexpected events are millennials (age 18-34). This isn’t surprising as young people often don’t plan ahead for the worst. Data from the survey says the ability to save for emergencies increases with age, income and educational level.

Of the few Americans saving for rainy days, 44 percent are senior citizens compared to 33 percent of Millennials polled. Sixty-two percent of those with annual incomes of $75,000 or more have enough savings to cover an unexpected expense, a number that’s two and a half times greater than people whose yearly household income is less than $30,000.

What’s more, 52 percent of college graduates have enough savings to cover unexpected expenses versus 32% of those without a college degree.

Budgeting is a step in the right direction

Meanwhile this same survey reveals that budgeting is a not a problem. Eighty-two percent of Americans keep a household budget and will turn to it in case of an emergency.  In addition to shaving off expenses from their budgets, others strapped for cash will turn to family and friends or their credit cards.

While the lack of rainy day funds does not surprise the president of Consolidated Credit Gary Herman, it is a little perplexing that so many of these individuals aren’t saving even with a budget.

“It is comforting to see that majority of Americans have a budget but there is a disconnect somewhere,” Herman says. “Individuals need to make sure that their budget cover their needs first and foremost – not wants – and must include saving for emergencies. A leaky roof or a sudden trip to the ER can wreak havoc on your budget. It is important to have a cash cushion, an alternative to using the credit cards or turning to family who most likely are struggling themselves.”

Herman says, the Great Recession dealt many a bad hand and folks are still struggling to pick up the pieces. As individuals borrow to cover one unexpected expense, what happens when another emergency comes along? Herman says often as these families pay down one debt; they take credit for another which perpetuates the cycle of debt.

In order to break the cycle, Herman says create an emergency fund before it’s too late.

Some experts agree families should have six months of expenses saved in an emergency fund, others say $1,000. Regardless of the amount, the bottom line still remains – everyone should be saving for rainy days.

Here are some ways to do so.

Consolidated Credit also has limitless resources to help you manage your finances. If you prefer to talk to a live person, dial for free 1-888-294-3130, one of our certified credit counselors will be happy to assist you. Or, to find out how much debt you’re in take our free Debt and Budget Analysis online.