If you’re going out at all, make sure you’re actually getting a deal. 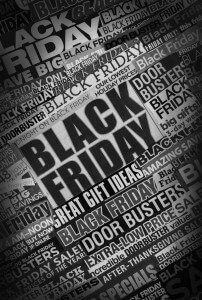 Some experts say the best time to snag a deal this week is between tonight and Thanksgiving morning; others say don’t waste your time and money

As you contemplate ditching your family on Thanksgiving to go dashing for deals, some studies are telling people not to bother. A survey by NerdWallet says the deals you think are bargains this year, are really just last year’s prices. Many electronics being sold as “Black Friday discounts” are spin-offs or derivatives of the original so retailers can afford to sell them for less.

Each year, Americans are trading more and more time for bargain hunting. In the past Black Friday was actually on Friday. These days, stores open at 6 p.m. Thanksgiving Day, and many retailers have been running Black Friday promotions all week.

Year after year Americans go all-in on the holiday hype and live to regret the spending sprees once it’s all over. So how do shopper feel heading into the official 2014 holiday shopping season?

Years ago, the start of the holiday shopping season was easy: You braved the crowds during Black Friday and enjoyed deep discounts. Now it’s more complicated. Here’s what we mean:

“The best time to shop online is actually late Wednesday night into early Thursday morning” say researchers at an online deals site GottaDeal.com. “While Thursday and Friday are by far the biggest days, online deal hunters should also keep an eye on the deals that occur earlier in the week.” The same survey also, says the best time to get deals “rich in quantity and quality” of online bargains is on Thanksgiving.

With all this conflicting best deal days, what’s a shopper to do?

NerdWallet says don’t fall for the hype. Black Friday sales are a bust, not the best deal days and aren’t only offered on the famed holiday.

Here’s what they found:

Yet, the National Retail Federation (NRF) forecasts Americans will spend $616.9 billion this holiday season. According to data from NerdWallet: “77% of Americans say they typically shop on Black Friday (or the evening before), and middle-class families will take longer to pay off their purchases than either lower-income families or wealthy earners will.”

Consolidated Credit urges consumers to control their spending and offers this Surviving the Holidays guide to avert a debt hangover in the New Year. Remember to budget, create a priorities list and stick to it. If you’re feeling overwhelmed by the season and need financial guidance, dial 1-888-294-3130, our certified credit counselors are standing by to take your call. Or, to find out how much debt you’re in take our free Debt and Budget Analysis online.

2020 Halloween Spending on a Budget

As people adjust their traditional Halloween plans for the pandemic, we look at 2020 Halloween spending and how to celebrate on a budget...Read full article