Mobile banking use is increasing rapidly but there may be some downsides. 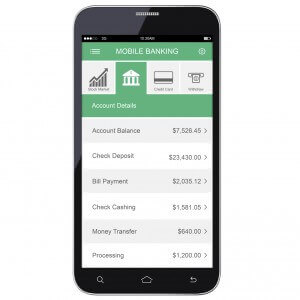 If Americans are addicted to mobile banking it is with good reason. Saving money is hard enough, but banks don’t always make it easy. A trip to a brick and mortar often involves filling out deposit and withdrawal slips, using lunch breaks to do bank runs when you could use that time to recharge or socialize. Not to mention the difficulty of keeping track of accounts and minimum balances. All factors the ease of mobile banking eliminates.

In the digital age these days, tablets are getting smaller and smart phones are getting larger. Carlisle & Gallagher Consulting Group, a business and technology consulting firm wanted to know and understand how mobile banking and the shift in mobile device size will influence Americans way of banking in the 21st century.

The results are telling. Turns out the larger the device, the more likely consumers are to conduct banking transactions online. This could be the reason why one in six U.S. consumers believes mobile banking is an important reason to buy a large screen smartphone or tablet.

Fifty-five percent of Americans use mobile banking habitually as part of their daily lifestyle. 100 percent of the survey respondents expect to buy more mobile devices by 2016.

And specifically for banking:

Millennials are especially welcoming of the phenomenon. And, those who are not yet caught up, plan to do so in the near future.

“We already know that Millennials are inclined to conduct common banking activities through the digital channel,” said David Vonk, who leads the North American banking practice at FICO. “While alternative banking may still be in its infancy, it has the potential to grow rapidly; especially as the Millennial generation enters its prime and pushes these services to the forefront of its banking agenda.”

While millennials embrace the idea of alternative banking, the older generations – well not so much. But given young people’s track record with finances, one can’t help wonder if too easy access may mean too many withdrawals. With mobile banking climbing the ranks in the banking sphere, one also begs the questions, “Is it safe and is it better for one’s overall financial wellbeing?”

Consolidated Credit’s Director of Education and Public Relations April Lewis-Parks says mobile banking for the most part is an excellent alternative but like everything else it has its pros and cons.

“Millennials’ fascination with mobile banking isn’t unwarranted,” Parks says. “Mobile banking though still relatively new seems to be a secure and highly convenient alternative to traditional banking. There’s the easy access component to your money and financial records anytime and anywhere. The ability to check deposits, transfer money and monitor transaction history. The only concern is that for consumers who struggle to keep money in the bank, easy access to money may lead them to spend more, thereby depleting their savings.”