Student debt has almost doubled in just five years. Is there any relief in sight? 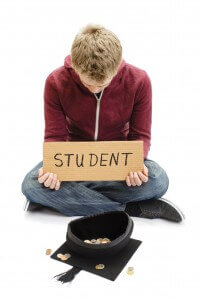 In 2009 student loan debt was causing serious concerns – totaling $13 billion to replace credit cards as the second leading source of debt for consumers. As a result, lawmakers focused on overhauling the federal loan system to try and stem this massive expansive of debt for young Americans.

Unfortunately, according to the latest quarterly report from the Federal Reserve Bank of New York, it doesn’t seem like the policy changes had the desired effect. In the years since the new legislation passed, student loan debt has rapidly expanded to a startling $25 billion. That’s almost double what it was when the student loan crisis came to a head.

Does this signal a policy failure or is something else at play that needs to be addressed?

“What the federal student loan deal in 2009 did was attempt to fix the interest rate issues that plagued the old system as it relied on Congress to make yearly decisions to set rates,” says Gary Herman, President of Consolidated Credit, “and while this helped with interest, it didn’t address the larger issue – college isn’t really affordable for the average American.”

An issue of affordability

Last year, Consolidated Credit created an infographic that shows how the cost of post-secondary education has increased with every generation. For example, base tuition costs have roughly tripled since the 1980s– never mind that tuition for a year of undergraduate education at Yale cost only $450 in 1940.

So while lawmakers have taken steps to try and stem interest rate growth on student debt, this does nothing to alleviate how much the average debt, itself, has grown over the years. To put it in plain terms, a lower interest rate on $25,000 in student debt is certainly good for borrowers because it means their debt won’t grow as fast with interest added and more of every payment goes to eliminating the principal.

However, it doesn’t fix how much debt students needed to take out in the first place. Unfortunately, unlike other debts where you can simply downsize or choose a more affordable option – like choosing an economy car over a sports car – the same can’t always be done when it comes to your education.

“If we continue down this path,” Herman points out, “we’ll reach a point where students have to choose the education they can afford instead of choosing a school based on their academics and career goals. I don’t think that’s a direction anyone wants to see us go towards in the U.S.”

A critical lesson for parents and students

Unless a federal decision is reached to cap tuition or limit the price tag for a college education, this means that the burden of making college more affordable falls to parents and the students themselves. Unfortunately, it seems like many aren’t taking the lesson to heart.

According to reports, parents are only planning to fund about 64 percent of their children’s education, but in reality they’ve only saved about 28 percent of that amount. So families are dramatically underprepared for the road ahead.

“Saving for college is critical if you want to help you children get ahead – both in life and when it comes to money,” says Herman. “Youth are struggling, and a big part of that is rooted in the fact that the average student now graduates $25,000 in debt. How are young Americans supposed to get ahead when they’re already starting off so far behind?”

Saving up for high costs ahead

The government may decide to step in to stem education costs eventually, but nothing in today’s political environment suggests that kind of oversight is coming anytime soon. With that in mind, parents need to help their children succeed by helping them save up.

“Saving for your children’s education is critical,” Herman reiterates. “Even if you can only make small monthly contributions, you’ll be surprised how much money you can actually generate over time. That’s why it’s so important to review your budget to see what you have available, then get a plan in place to make sure it happens.”