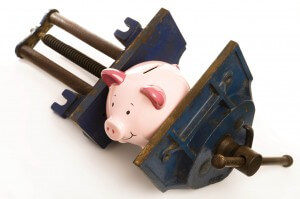 When we hear the phrase “paycheck to paycheck”, most of us usually think of the lower income subset of the population.  However, a new study by SunTrust says, not so fast. Some people live paycheck-to-paycheck, not because they’re flat-out broke, but because they’ve invested in things like real estate, stock, Art, collectibles and antiques, collectively referred to as “illiquid assets.”

By definition illiquid assets are those that cannot easily be converted to cash. Quite often these assets are out of reach for majority of low income families. Although they may be great assets to have, they are often of little immediate value when money is urgently needed. Turning them into cash may leave owners with little choice but to sell at steep discounts.

According to the SunTrust survey, a third of households earning $75,000 or more are not saving as much as they should and live paycheck-to-paycheck sometimes. Forty four percent of those surveyed agreed that spending on lifestyle purchases like dining out and entertainment causes them to save less than they should each month. As for millennials (18-34 year olds) with the same household income, that number jumps considerably to 71 percent.

How hand-to-mouth differs based on income

While hand-to-mouth living is financially unhealthy regardless of one’s socio-economic status, the struggles higher income families face parallel that of lower income families who also live paycheck-to-paycheck.  Interestingly, the wealthy’s plight involve sacrificing on luxuries like dining out and entertainment. As for lower income families, they usually have tougher choices, like choosing between bills and more than bare minimum groceries. Another distinguishable difference that favors the wealthy is length of time, as mentioned in a Washington Post article.

“Perhaps the most striking difference is that while the poor hand-to-mouth tend to stay that way for long periods of time, wealthy-hand-to-mouth status is transient, lasting an average of only 2½ years.”

It is evident that the scenarios between the two income groups are starkly different, but one thing they do have in common is a lack of savings – a deficiency financial experts say could be detrimental to both their financial and physical health.

“The recession left a dent in many Americans’ pocketbooks,” President of Consolidated Credit Gary Herman says. “As a result people are in debt, not because they want to be, but because of the harsh realities of life and the financial responsibilities that come with them – student loans, medical debt, unemployment, underemployment and slow job growth. Still, regardless of income, a spending plan and a budget are very important tools in staving off living paycheck-to-paycheck. The first step in breaking the cycle is to evaluate the reasons why you’re living hand-to-mouth. Little changes like paying down debt and eating at home more often can lead to both financial and mental freedom.”

In order to prepare for life’s moments that matter, SunTrust says you have to save for both “sunny” and rainy days. Brad Dinsmore, consumer banking and private wealth management executive at SunTrust Bank asserts: “It’s easier to stay motivated when you’re saving for goals that are connected to your values and bring you happiness.”

Tips to break the cycle

Here are some suggestions to break the paycheck to paycheck cycle:

Regardless of your income, if you’re tired of living hand to mouth and need help devising a budget, a spending plan, or help getting out of debt, Consolidated Credit can help. Request help online or call now for free 1-888-294-3130.