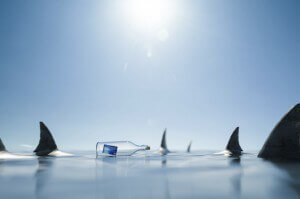 A new study by TransUnion has found that credit cards may now be a “lesser evil” when it comes to the average consumer’s debt profile. While credit cards are still a source for debt, it’s really a drop in the bucket compared to high student loan debt for the young and mortgage debt for the old.

Each year, TransUnion analyzes something known as the “consumer loan wallet.” This breaks debt down into categories to see what “share” each type of debt has for the average consumer in different age groups. Loan share is broken down into six categories:

The data analysis team at TransUnion noticed that while loan share is largely consistent with previous years for all age groups 30-59, there have been some notable changes for youth (20-29) and seniors (60+).

Essentially, youth are facing a debt crisis caused by student debt. In 2005, student loans accounts from 12.9% of loan share for 20-29 year-old consumers. In 2014, that’s jumped to 36.8 percent. It’s the second largest source of debt for young consumers after mortgage debt (42.9%). Given the current conversation about student loans, these numbers are hardly surprising – making programs like student loan consolidation all the more essential.

Still what’s truly surprising is what’s happening to the loan share for consumers over the age of 60. For seniors, mortgage debt (including HELOC) and student loans both increased share, while credit card, auto and other decreased. That’s concerning for people like Gary Herman, President of Consolidated Credit.

“Increased mortgage debt can be risky for seniors,” Herman says. “When you reach retirement age, owning your home free and clear of any mortgage debt can be boon to your financial outlook because no matter what happens, you won’t have to worry about foreclosure. If seniors aren’t paying off their mortgage before they retire or borrowing against the value of their homes using HELOC loans, this puts people in a weaker position financially.”

In both age groups – and overall for all consumers regardless of age – credit cards have lost loan share. Overall for all ages, credit cards dropped from 5 percent share in 2005 to 4.2 percent in 2014. TransUnion also reported average credit card balances are falling, too. The average balance per active credit user dropped from $3,261 in 2009 to $2,315 in 2004 – a 27 percent decrease over a 5-year period.