Americans are borrowing more and falling behind less, but pre-recession debt levels concern many experts.

Every three months, the Federal Reserve releases a Quarterly Report on Debt and Credit. It shows how much total household debt U.S. consumers carry each quarter. In mid-August, the Fed released the results for the second quarter of 2017 (April-June). 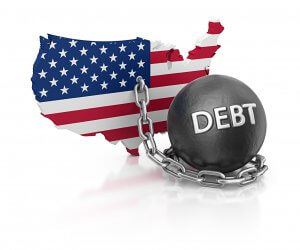 Americans continue to borrow more money, with total household debt up in almost every category except two. However, delinquency rates are down in most categories, showing that households may be able to handle more debt.

In other words, American households may finally be borrowing within our means. But pre-recession debt levels and record highs still make experts nervous. There’s talk in financial circles about the “next recession.”

Total household debt increased by $144 billion in the second quarter to $12.84 trillion. Most types of debt saw increases, although student loans were flat and HELOCs decreased:

Meanwhile, 90+ day delinquencies fell from the first quarter to the second for most types of debt:

So, if the data is relatively flat for delinquencies and household debt has only increased slightly, why are experts worried? The answer lies in “sustainability.” Many experts believe that average American households are close to debt levels that they can’t sustain. In other words, this is the high before the fall.

“Only borrow what is within your means to repay,” advises Gary Herman, President of Consolidated Credit. “It sounds simple, but it’s easier than you might think to get overextended. The threshold of what you can afford to repay often lies below the financing you can get approved to take on. And the problem often starts with increased credit card debt.”

In normal circumstances when you want to get a new loan, the lender checks your debt to income ratio. This is the amount of debt you hold relative to your income level. Basically the more income you make, the more debt you can comfortably afford to repay.

Lenders won’t approve you for a new loan if the amount will tip your debt to income ratio over 41%. If you total your debt payments with the new loan included at it’s less than 41% then you get approved.

However, credit cards don’t work the same way. You get approved for new credit cards based on your credit score. Your credit score also plays a factor in the limit the issuer gives you, along with your income. But no one checks your DTI before you start making charges. So, you can easily run into debt problems if you overcharge.

“The best thing you can do to avoid problems if there is another recession is to pay off credit card debt now,” Herman advises. “You can also minimize your risk of things like foreclosure by avoiding things like Home Equity Lines of Credit. If you need to borrow against your home, talk to a HUD-certified housing counselor first. But the more you can focus on saving and paying off debt now, the better off your household will be when another recession eventually comes around.”