Home » Financial News » What are Grandparents Good for? 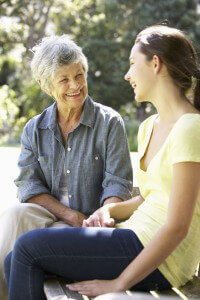 The study concludes, “Grandparents have a big opportunity to make a positive impact on their grandchildren’s future financial success by simply talking to them about money.”

How they did it

The financial services company polled 1,000 grandparents with grandchildren 18 to 24 years old. They didn’t just call them on the phone, however. Researchers sat with the both young and old in focus groups.

Paying for college is the key issue for both grandparents and grandchildren.

Even though 66 percent of grandparents felt no obligation to help pay for their grandchildren’s college, 23 percent felt compelled to do it, anyway – if those young adults were “mature” about money and had good spending habits.

When researchers spoke to the grandchildren, they learned 30 percent have nothing at all saved for college – even though nearly all (97 percent) were concerned about it. They’re looking for advice, and they want it from someone they know has been through it all before.

Congress left consumers vulnerable to garnishment with the latest round of stimulus. Learn why your stimulus check may be at risk and how to protect it...Read full article