In a song of debt and credit, which banner do you fly in your financial house?

In less than a month, the hit HBO fantasy series – Game of Thrones – will return for its fifth season on April 6, 2014. Fans are excited to see what will happen, particularly following the epic Red Wedding at the end of last season. George R. R. Martin is famous for the dramatic highs and lows he puts his characters through, so those who were on top at the end of the fourth season may soon find themselves at the bottom or even missing their head.

This kind of turmoil makes for great television. However, if the economic uncertainty of the past few years has left your financial realm in as much turmoil as the characters in the show then you may be wishing for a dragon to pass by and raze the Fed and Congress to the ground. From government shutdowns one day to record high stocks the next, it’s hard to know if our economy is still suffering in a long winter or not.

Still, whether winter has passed or we’re still in the final throes of a frigid economy, you have to do what you can to make sure your house is on top. So how do you ensure there’s tranquility and stability in your realm? First you need to decide which financial banner you fly in your house so you can choose the best strategy to win the day. 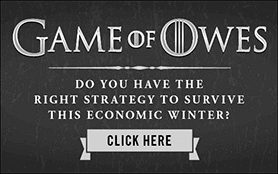