How to Reduce Credit Card Debt

Making a credit card debt reduction plan that works for your budget and goals. 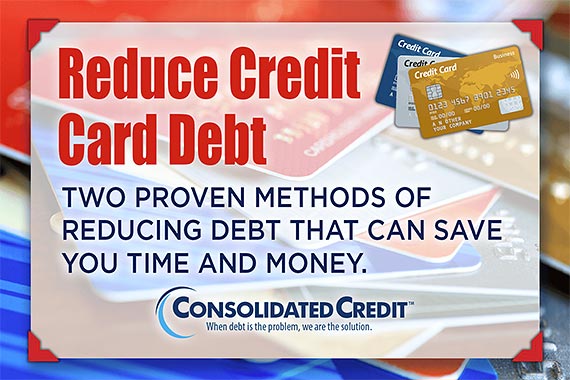 If you owe balances to multiple credit card companies, figuring how to reduce credit card debt can feel like an uphill battle. You diligently make payments month after month, but your balances never seem to go down. And every time an unexpected expense arises that has to go on a credit card, you dig yourself further in the hole. So, how do you reduce debt effectively when you’re already living paycheck to paycheck?

The secret to debt elimination lies in reducing or eliminating APR applied to your balances. By minimizing the interest charges that get added to your debt each billing cycle, you can focus on paying off principal; that’s the actual debt you owe. Then you simply prioritize your balances and knock out each debt one by one.

Narrator: Credit card debt can be one of the toughest enemies you face as you fight to protect your financial realm. Armored heavily with high interest rates, regular minimum payments often barely make a dent in these debts.

[On-screen text] There are 2 basic strategies to reduce debt effectively. The style you choose depends on your situation.

Narrator: Luckily there are two strategies you can use to fight back effectively. Which method you choose really depends on your situation.

[On-screen text] But first… you must know your enemy

Narrator: But first, you must know your enemy to craft an effective strategy to win the war.

Narrator: Average credit card debt in the United States is over $5,500, and is even more when you focus only on those who carry balances over every month. And while the average number of cards is less than four, that number often grows to five to ten for those fighting against debt problems.

[On-screen text Fighting style no. 1: Tiger Style. For those with the power to take big bites out of debt every month. Debts to target: Highest interest rate first

[On-screen text] How it works

Narrator: Here’s how you make this strategy work.

Narrator: First streamline your budget by cutting out expenses that you don’t absolutely need and this will maximize your power.

[On-screen text] Hold off smaller enemies: Maintain the minimum payments on all of your debts except one

Narrator: Hold off on smaller enemies by making standard minimum payments, then focus all of that power to deliver powerful blows to the next debt with the highest APR.

[On-screen text] Take down biggest threat first: Make the largest payment possible on the debt with the highest interest rate

Narrator: This style uses your credit power to take out your biggest enemies in debt first so you target your debts in order of the highest interest rate.

[On-screen text] Move on to the next biggest threat: Once the first debt is done, roll your cash over to the next highest APR debt

Narrator: Once that first big boss is down, move on to the second and focus the bulk of your power to defeating it next.

[On-screen text] Start clearing the field: As you work your way down, you’ll have more cash power to eliminate debt even faster – you gain more power as you go!

Narrator: As you work your way down, taking out each opponent with the highest APR, you’ll begin to clear the field and gain power as you go.

[On-screen text] Eliminate multiple enemies at once, when possible: Once the first debt is done, roll your cash over to the next highest APR debt

Narrator: By the time you get to your smallest enemies, you should have enough power to cut down several enemies at once until all debts are eliminated!

[On-screen text] Are you a tiger? You need power to be a tiger – if you don’t have a large volume of cash available in your budget, you won’t have the power necessary to take bites out of your biggest debt threats.

Narrator: Tiger style is best used by fighters with the financial power already available. So, if you don’t have much cash on hand, you may not have the power needed to take out those big enemies quickly. In which case…

[On-screen text] Fighting Style No. 2: Crane Style. Peck away at your smallest debts first to gain the momentum you need to win. Debts to target: lowest balance first

Narrator: Crane Style may be your best method.

Narrator: Scour your budget for any little bit of cash you can use to eliminate debt and make minimum payments to keep your biggest enemies at bay.

[On-screen text] Keep combatants on the field: Keep up with minimum payments on all of your debts

Narrator: Target debts with low balances first because they’re easy to wipe out. Here’s how this strategy really works.

[On-screen text] Start by pecking away at your smallest debt: Devote all of your extra cash to make the biggest payment possible on your lowest balance

Narrator: This method pecks away at smaller enemies first so you can gain power as you start to clear the field.

[On-screen text] Each debt eliminated boosts your energy: Every time you pay off a debt, you eliminate that bill so there’s more cash to face bigger enemies

Narrator: Next devote your focus to taking down the debt with the lowest balance. You’ll gain monetary power each time you cut down a debt because there will be one less debt to eliminate.

[On-screen text] Work your way up to the biggest baddies: Once you’ve cleared out all of the small debts, roll those savings into the cash you’re using so you can take out the biggest threats.

Narrator: By the time you get to your biggest balances, you’ll have the power you’ll need to take them down!

[On-screen text] Are you a crane? If the debts that have the highest interest rates are also the ones with the biggest balances and you don’t have a lot of cash, then it makes sense to start at the bottom and work your way up.

Narrator: Crane style is best suited for debt fighters with limited cash flow who need to gain momentum as they battle.

[On-screen text] Consolidated Credit. When debt is the problem, we are the soluti8on. Call 800-210-3481, www.consolidatedcredit.org

Narrator: And remember, if you’re having trouble winning your battle, Consolidated Credit is here with reinforcements that can help you win!

As you decide on the best way to take down credit card debt, there are two basic tactics you can use. The strategy we outline above stays the same no matter which path you choose. The difference is how you prioritize your credit card debts for reduction in Step 3. We go into more detail on each step below, so you know exactly what to do at each stage to get out of debt.

This is the fastest and most cost-effective method to reduce credit card debt because you focus on high APR debts first. If you owe $1,000 on a credit card with 20% APR, it costs you more money each month than the same balance on a card at 15% APR. For eliminating high APR debts first reduces the total cost of getting out of debt.

Here’s how to reduce credit card debt with this method: 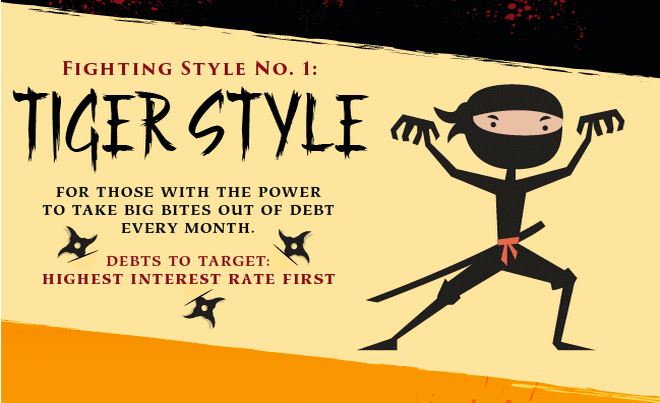 As you eliminate each debt, you free up more money to pay off the next debt. This accelerates repayment until you reach zero on all your balances. This acceleration to reach the bottom is why this method is commonly referred to as the Debt Avalanche – a term coined by the financial expert Dave Ramsey.

If your highest APR debts are also your biggest balances, tiger style debt reduction may not work. This is especially true if you couldn’t free up any extra cash for debt elimination because your budget is tight. In this case, you may not have enough power to tackle your largest debts first. Instead, you need to peck away at your debts, starting with the lowest balance first. 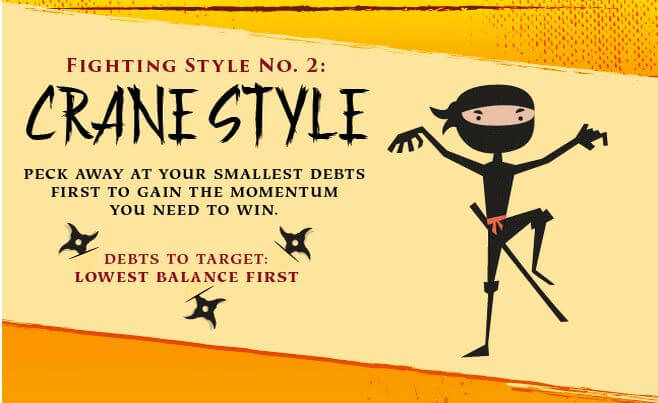 All the steps above stay the same, but you prioritize your debts in Step 3 by current balance. You start with the lowest balance first, which frees up money bit by bit. Each debt you eliminate gives you more money to take out the next debt.

With crane style, you essentially start pecking away at your debts. Each debt that you knock down gives you more financial power to take out the next. By the time you get to your biggest balances, you have the monetary power you need to take them down.

This is also called the Debt Snowball method.

For easy reference, we’ve outlined each style of debt reduction step-by-step in this infographic: 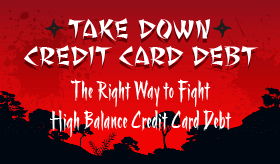 How long should it take to reduce debt to become debt free?

This depends on which method of debt reduction that you use. But a good rule of thumb for making a debt reduction plan is that it should never take more than five years to get out of credit card debt. That means you should be able to pay off all your credit card balances with 60 payments or less. If you can’t eliminate your debt in-full within 60 payments no matter how much you scale back your budget, then you explore options for debt relief.

If you can’t pay off your debt in 60 payments or less, don’t panic. There are other ways to reduce debt quickly that won’t damage your credit score. The best way to reduce debt fast when traditional payment methods won’t work is through debt consolidation.

Debt consolidation works on same principal as debt reduction. You reduce or eliminate interest charges, so you can focus on quickly paying down principal. But instead of trying to pay off one debt at a time, you roll them all into one payment at the lowest interest rate possible.

There are three ways to consolidate debt:

Any of these options will consolidate your debt so you can pay it off efficiently with one monthly payment. The first two options work by taking out new financing – either a credit card or loan – that pays off your existing balances. The last option is a professionally assisted form of debt consolidation. You still owe your original creditors, but a credit counseling helps you set up a payment plan and negotiates on your behalf to minimize APR.

How long does debt reduction take after you consolidate?

This depends on which consolidation option you use and how much money you have to make monthly payments. But there are some general timelines for debt reduction that you can use as a guide: