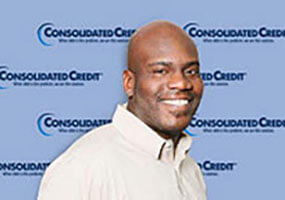 Like other Consolidated Credit certified credit counselors, Ludole worked first for a credit card company. He was a customer service rep with American Express, so he knows how easy it is to fall into debt.

“There was a woman who called crying because she couldn’t take the creditor calls anymore,” he recalls. “She had also lost her son a few months earlier and had to use her credit cards to cover the funeral cost.”

Ludole says the woman was about $16,000 in debt and because she was on a fixed income, she was having difficulty paying it down.

There’s always a reason why people fall into debt. What’s the most common reason you’ve heard?

“Poor money management,” he says. “A lot of people don’t realize it until it’s too late. They use their cards over and over until it’s a cycle and once the accounts are maxed out and they can’t use them anymore, they start getting hit with fees. Sadly, that’s when they realize they have a problem; that they need to get the accounts taken care of.”

What can these folks do to avoid getting to that point?

“People need to understand credit,” he says. “Many people I speak with don’t even look at their statements and they’re not sure what the interest rates are. One of the main things I tell people is that it’s very important to go over your statement, understand how much you owe, scrutinize where your money is going and how long it’s going to take you to pay it off.”

What’s a bizarre reason a client has given for falling into debt?

“Not too long ago, I spoke with an older gentleman who got duped by his much younger girlfriend. She went on a shopping spree with his credit card and bought clothes, jewelry and stuff like that to the tune of $40,000.”

What’s the nicest thing a graduate from the program has ever said to you?

Reaching into the drawer of his desk, he pulls out a photo of the cutest baby boy.

“One client actually sent me a picture of their grandchild, introducing me to the newest member of their family,” Ludole beams. “And the thank yous are constant and always make me feel good.”

Has anyone cried upon completion of the program?

“People have been very emotional,” he says. “They often say, ‘I can’t believe that I’m actually done. I never thought three years ago this day would come.’ And some of them are also very shocked to be done in such a short span of time – 3½ to 4 years.”

Do you ever get emotional with them?

“I show excitement,” he says. “They did the hard part of maintaining their payments every month and being disciplined about not getting new accounts while paying it off.”

What advice do you have for folks out there?

“In this day and age, you need to have credit; unfortunately, that’s the reality of it. You may have one or two credit cards, but people just need to be very smart about them,” he advises. “You want to show that you’re using a credit card, but limit your spending and always pay on time to avoid late and penalty fees.”

When not used for building credit, Ludole says: “If you have cash, pull out your cash instead or your debit card. Use your credit cards for emergency purposes, not as your main source of income or spending. They should be used as a last resort.”

Use credit cards to build your credit not ruin your credit. If your attempts to build credit have left you with an insurmountable amount of debt, our certified credit counselors can help you start the rebuilding process. Simply, dial 1-888-294-3130. Or, to find out how much debt you’re in, request a free Debt & Budget Analysis online.