FORT LAUDERDALE, Fla., Oct. 29, 2019 /PRNewswire/ — In the last decade, Halloween spending in this country almost doubled, but the reason is really spooky.

“Studies show almost half of all Millennials admit to making Halloween purchases for items just to include them in social media posts,” says April Lewis-Parks, Education Director of Consolidated Credit.

Halloween certainly isn’t the most expensive holiday on the calendar. As you can see from average spending statistics, most people usually don’t spend over $100 total on Halloween. Still, when you’re on a limited budget, even $80 can be hard to cover with free cash flow. As a result, those purchases for costumes, decorations, and candy can end up on credit cards. Even a few new charges are a few too many when you’re working to become debt-free.

She calls the phenomenon “costume envy,” and it might be one big reason why Halloween spending rose from $4.75 billion to $8.8 billion in the past decade, according to the National Retail Federation.

“Halloween was once an inexpensive holiday of homemade treats and costumes out of bedsheets,” Parks says. “Now we spend hundreds of dollars – only weeks before we spend hundreds more on Christmas and Hanukkah gifts.”

“Halloween is the one holiday that should be a scary good time, not a scary spending time,” Parks says. “It’s the one holiday where you can truly have a fun time on a small budget.” To see how consumers are spending check out Consolidated Credit’s Frightening Halloween Statistics infographic.

About: Consolidated Credit is a nonprofit 501(3)c and has been assisting consumers for over 26 years. Their mission is to assists families throughout the United States in ending financial hardships through financial education and professional credit counseling.

This infographic shows Halloween statistics for expected consumer spending in 2021, so you can see how your shopping budget stacks up and find ways to save…. 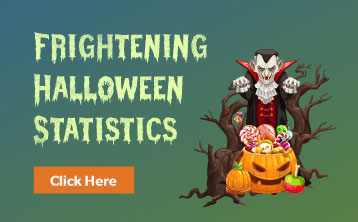