Is America facing a “gift gap” to complement our wage gap?

This week’s study focuses on Consolidated Credit’s own holiday spending survey. Each year, we ask people who are working to pay off debt how they plan to spend for the holidays. As the most expensive shopping season of the year, the winter holiday shopping season places an immense burden on low and middle-class households. This year, that burden seems to be taking an even bigger toll.

Consolidated Credit polled 1,263 adults that have contacted our organization for credit card debt help. These are the results… 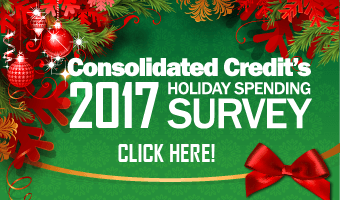 If you look at national surveys of the general population, Americans will spend more this year on the holidays. According to the National Retail Federation,  the average household will spend $967 this year; that’s up from $935 last year.

However, Consolidated Credit’s survey respondents overwhelmingly say that they will spend less instead of more.

In addition, over three quarters of respondents (78%) say that they plan to spend less than $500 this year. 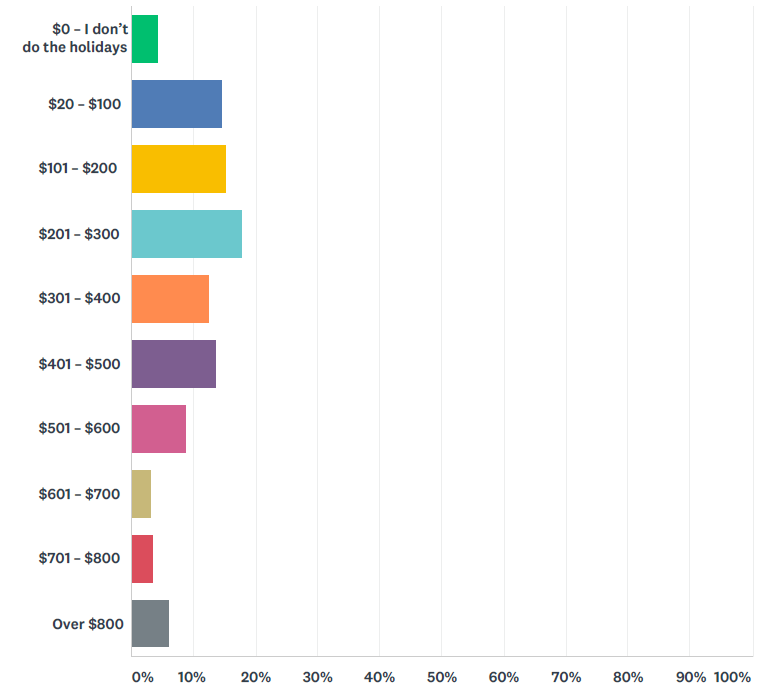 Most – if not all – of that budget will be used on gift giving in most households: 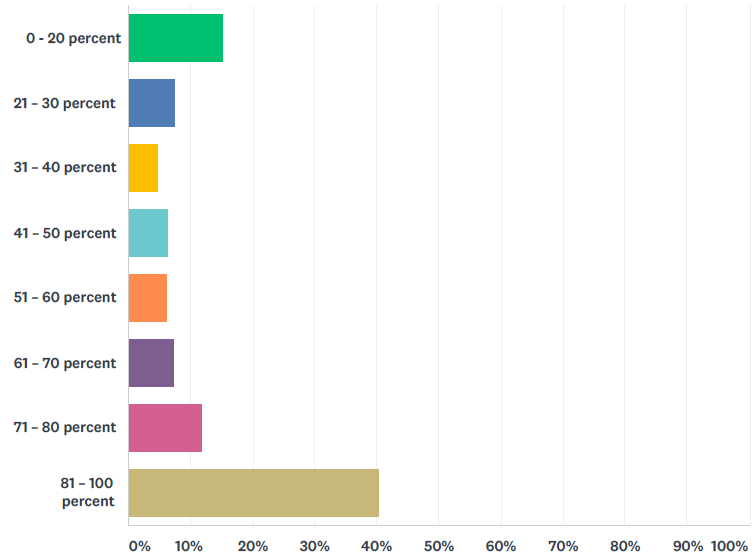 We also asked those who said they would spend less to tell us why. Most of the answers point to a lack of financial stability, from economic uncertainty to decreased income to less savings. 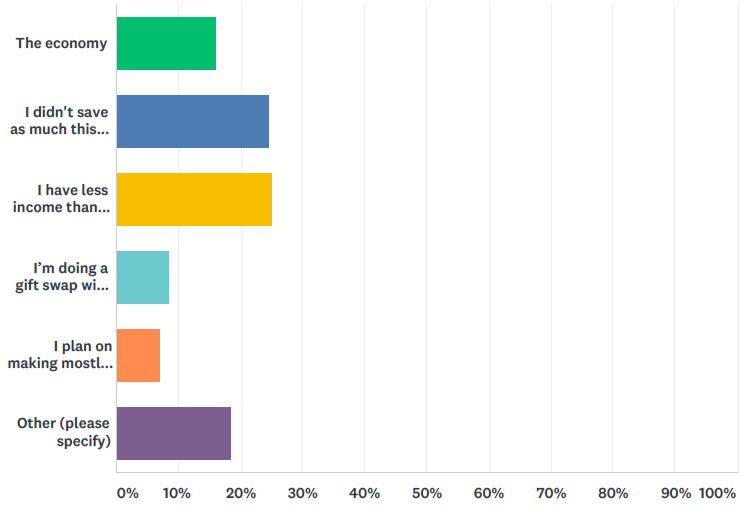 “Other” includes reasons from buying a home to wanting to save more money this year. Interestingly enough, those who said they would spend more didn’t cite more prosperity as the reason. In fact, one in four said their family had grown so there were more people to buy for this year. Others say they feel pressure to make their loved ones happy, and that they simply love spreading joy and good cheer. 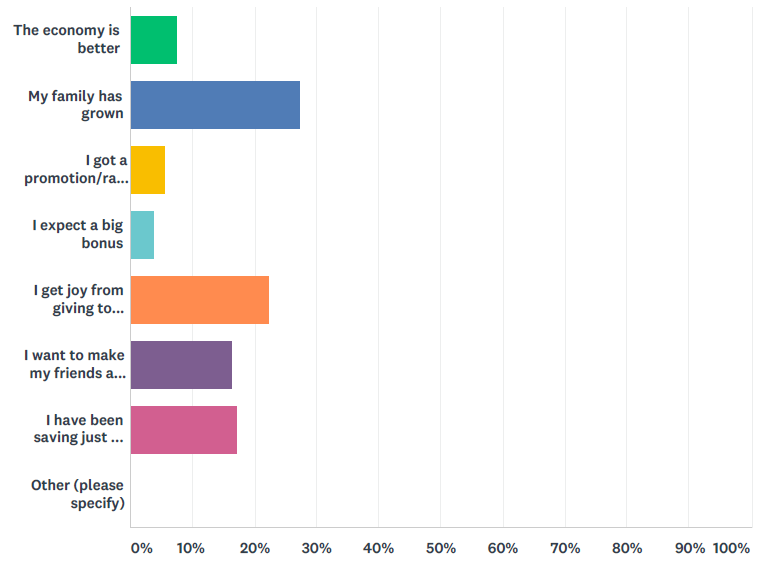 That makes sense, given that gift giving represents the largest part of people’s budgets tend to go towards gifts. This year, almost half (48%) of our respondents said they would buy gifts for about 1-5 people. However, one in three (34%) said they needed to buy for 6-10 people. 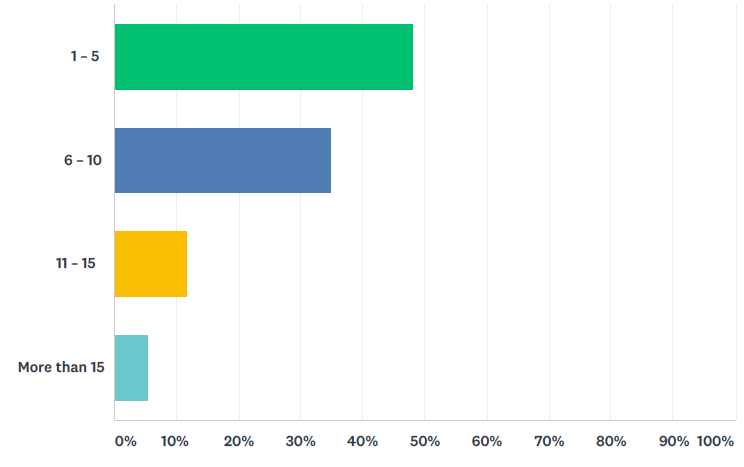 The good news is that people may be getting smarter with the extras. Most respondents are skipping pet gifts this year and those who won’t at least plan to be frugal. 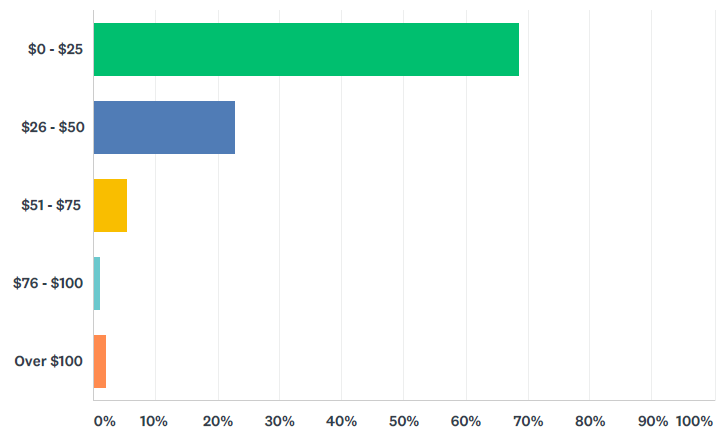 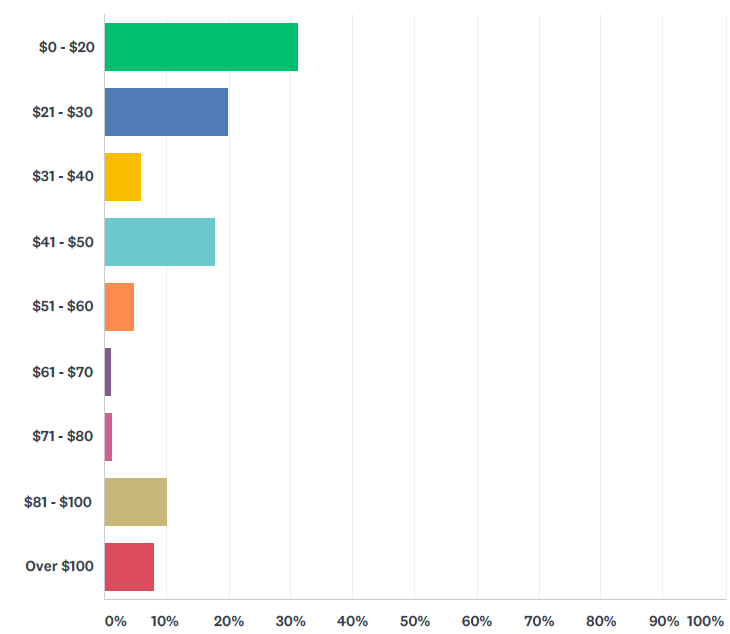 As far as other holiday expenses go, nearly two thirds (66%) of respondents will spend less than 20% of their holiday budget on entertaining. 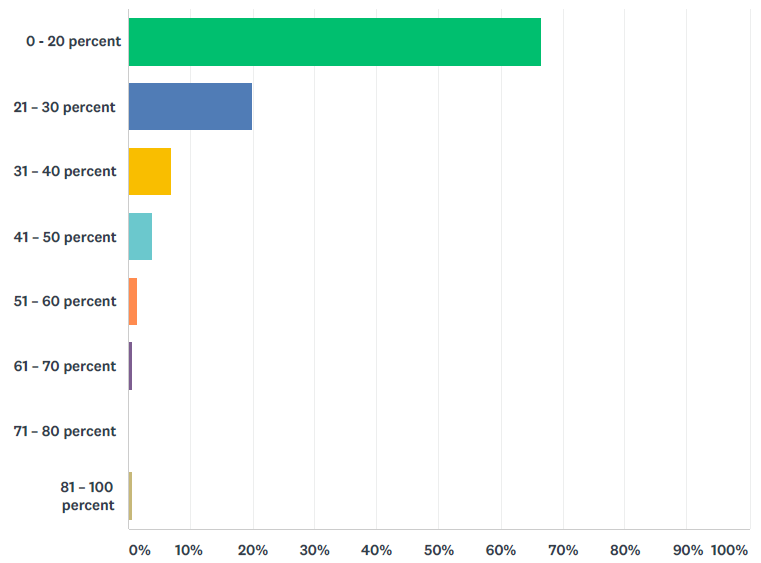 Most people we asked are not travelling for the holidays; the majority who are say they plan to drive to save money. As a result, most will also spend less than 20% of their holiday budget on travel. 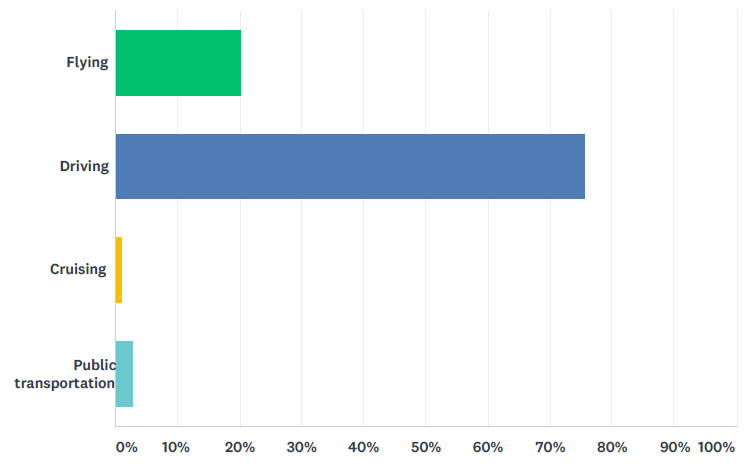 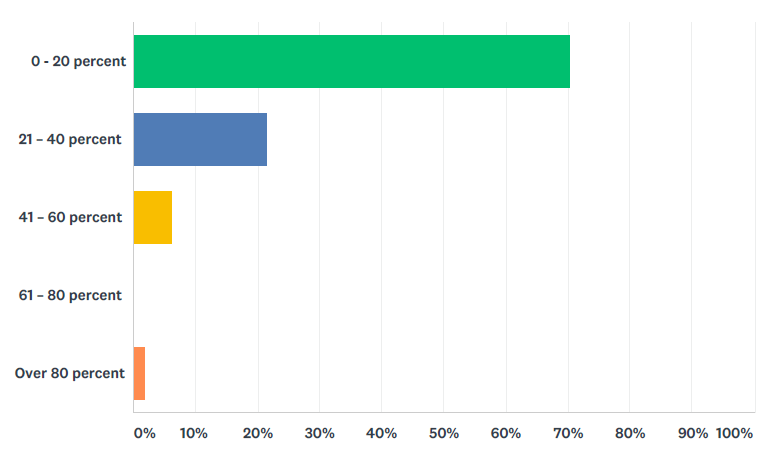 People also have learned to shop smarter, which usually involves shopping earlier. In fact, over one third of respondents say they shop year-round now, as items go on sale. 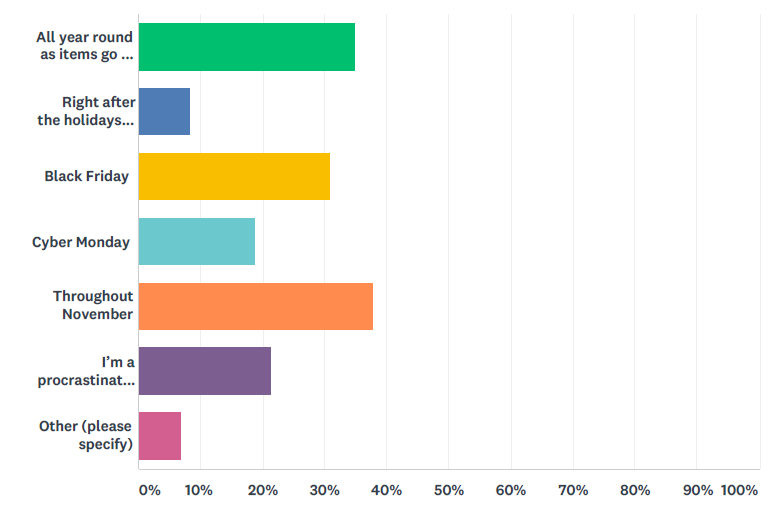 That allows many shoppers to avoid using credit to cover holiday expenses; they can use savings or cash instead. However, 42% still say they use credit cards to cover at least some holiday expenses. 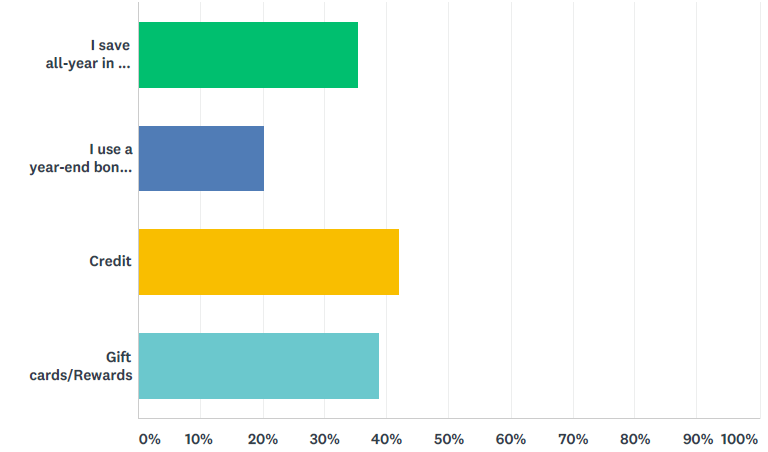 That’s in line with the number of people who told us they incurred holiday debt last year. Only about 45% said they did. Out of that number, over two thirds (70%) said they’re still paying off last year’s debt.

“Households need to budget carefully for the holiday shopping season,” says April Lewis-Parks, Consolidated Credit’s Financial Education Director. “It’s encouraging that families that have reached out to us for counseling plan to spend less than average Americans. But they need to plan carefully and stick to that budget if they want to keep that goal.”

The concern is that while families may plan to spend less than $500, that things like impulse purchasing and last-minute gift giving could jack that price tag up.

“If you plan to spend $500 and then end up spending $900, it’s very likely that the added costs will end up on credit,” Lewis-Parks explains. “In order for your holiday budget to be effective in keeping you out of debt, it must be accurate.”

Consolidated Credit offers these resources to help you stay on-budget:

Consolidated Credit helps you shop smart this holiday shopping season so you can stay on-budget and avoid a holiday debt hangover.

Be Penny Wise, not Pound Foolish about holiday shopping.

Penny Wise shoppers plan ahead so they can enjoy the holidays, while Pound Foolish shoppers overspend and overstress. Because they fail to budget, costs go up and debt grows before the end of the year. They shop with friends, which increases the chances of impulse buys and shop tired or hungry, which leads to rash purchasing decisions.

Penny Wise makes a list before heading out to shop. And they take time to look for sales and comparison shop to get the best prices.

And while both Penny Wise and Pound Foolish may be out early on Thanksgiving and Black Friday, Penny Wise only hits the stores when it really counts to maximize shopping. Meanwhile Pound Foolish is out fighting over fad gifts that won’t stand the test of time. Penny Wise buys gifts that are meant to last, like clothes, appliances and electronics you need for school or work, and even practical gifts like tires.

Only Pound Foolish shoppers start shopping at the end of November or into December. Penny Wise shops year-round, buying one big item per month to spread out the cost. And they buy universal gifts like digital picture frames whenever they go on sale. This way they have inexpensive last-minute holiday gifts to give out as needed.

The Pound Foolish just buy, buy, buy and don’t even bother to track their receipts. Penny Wise uses receipts to track spending, in case retailers offer a cost difference after the holidays. They also ask for gift receipts to include with gifts for easy returns.

When the Penny Wise shop online, they only shop secure sites to avoid identity theft, because you’d have to be Pound Foolish to add to your holiday stress with credit fraud.

Penny Wise also knows how to save big on holiday meals. They plan meals carefully based on the number of attendees and how much everyone can eat. They also buy nonperishables in bulk because they can save up to 20 percent. Pound Foolish makes enough food to feed an army instead of a dinner party. And they don’t use leftovers, so much of what they cook gets tossed in the trash.

Finally, Pound Foolish puts everything on credit because it’s easy and they might earn rewards. But Penny Wise uses cash and debit when possible and they plan ahead to pay off high interest rate credit card debt in the first billing cycle. Purchases that take more than one billing cycle to pay off go on a card with a low APR. So when Penny Wise uses credit cards, they use two AT MOST for holiday purchases, while Pound Foolish ends up with a holiday debt hangover.

Be Penny Wise and shop smart this holiday season. And if you start to feel any stress over holiday debt, call Consolidated Credit for help. 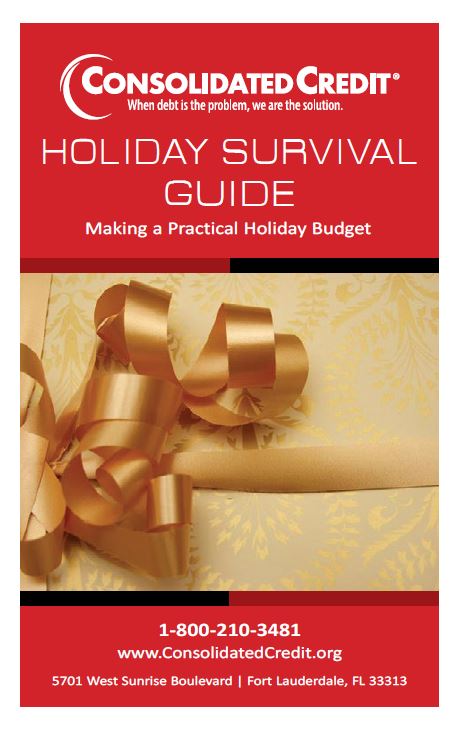 No matter how much people love the holidays or how well they’ve planned, many people find themselves frazzled at some point. This publication helps you develop a practical spending plan to cover all your expenses, from gifts and decorations to travel and entertaining. Learn how to enjoy the holidays without taking on debt.