Home » Infographics » Celebrate the 12 Days of FinLit with Consolidated Credit

Celebrate the 12 Days of FinLit with Consolidated Credit

April is National Financial Literacy Month. To mark the occasion this year, we created the 12 days of FinLit. Each day features a key financial topic that people with good financial literacy can recognize. Do you know them all? If no, we give some helpful explanations of each day below the infographic. 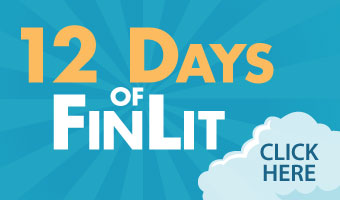 Each of the 12 Days of FinLit explained

On the first day of FinLit, you get an annual consumer credit report for free. This refers to the free annual credit report that every consumer is guaranteed by federal law. The Fair Credit Reporting Act states that, by law, all the credit bureaus must make available a free copy of a consumer’s credit report to them once every twelve months.

To take advantage of this, you simply go to annualcreditreport.com to download your credit report each year.

The first three methods can be extremely beneficial in reducing or eliminating interest charges. This allows you to pay off debt faster and get out of debt for less money total. Using home equity does the same thing, but it increases your risk because you convert unsecured debt to secured. If you don’t make the payments, the lender could foreclose on your home. That’s why we recommend sticking with the first three options.

On the fifth day of FinLit, your wallet brings the five creditworthy C’s. This refers to the 5 C’s that lenders and creditors use to assess a consumer’s “creditworthiness.” When you apply for financing, these are the five standards that determine whether you get approved.

On the sixth day of FinLit you receive six months, no inquiries. This gives a nod to a credit scoring rule related to hard credit inquiries. Hard credit inquiries are created on your credit report when you authorize credit checks during credit and loan applications. Too many hard inquiries within a 6-month period can decrease your credit score. So, you want to spread inquiries out. Ideally, you should only apply for new credit or loans about every six months to avoid unwanted credit score damage.

The ninth day of FinLit offers nine tricks for FAFSA. This relates to nine relief options that are available to help borrowers working to repay federal student loan debt.

On the tenth day of FinLit, your wallet offers “10 years interest-only.” This is a reference to the interest-only draw period on a Home Equity Line of Credit (HELOC). When you take out a HELOC, you get ten years to “draw” from the credit line. During the draw period, you only pay interest charges. Principal repayment starts after ten years. This means that HELOC payments “balloon” after 10 years, because you go from interest-only to repaying principal plus interest.

On the twelfth and final day of FinLit, you get twelve months of rate locks. This refers to a law created by the Credit Card Accountability, Responsibility and Disclosure Act of 2009; it’s called the Credit CARD Act for short.