Dealing with Debt Caused by Domestic and Economic Abuse

Consolidated Credit is proud to help women find their power in financial freedom.

There’s a common misconception that credit card debt problems usually come from being irresponsible with money. But these challenges often have roots in serious issues that are outside of a credit user’s control. One such issue is debt that’s generated as a result of an abusive relationship. Victims either suffer what’s formally known as economic abuse during the relationship or they are forced to go into debt to get out of the relationship.

These types of debt problems are often compounded by other financial challenges. Victims frequently have limited income as they exit the relationship and may even face homelessness. However, there are programs that can help victims overcome their debt to achieve financial stability, so they can move forward with their lives.

According to the National Coalition Against Domestic Violence, there are more than 10 million domestic violence victims each year. In addition, between 94 and 99 percent of domestic violence survivors report they experienced some type of economic abuse as well.

The NCADV defines economic abuse, saying it “involves maintaining control over financial resources, withholding access to money, or attempting to prevent a victim or survivor from working and/or attending school in an effort to create financial dependence as a means of control. Victims and survivors are often forced to choose between staying in abusive relationships and poverty or even homelessness.”

Judith was forced to make that choice after suffering 25 years of domestic abuse. “I had money when I needed it, but it came at a price. I walked out the door with nothing but the clothes on my back and my cell phone.”

What is Economic Abuse?

Economic abuse affects millions of Americans annually. We explain what economic abuse is and give examples that reveal the extent of this abuse in the US…. 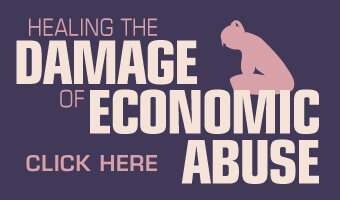 “You know what,” Judith says, “freedom is expensive.”

When she left the beautiful ranch home she and her husband shared in 2006, it wasn’t the first time she tried to leave. After a previous attempt, he’d beaten her and threatened her with a gun. Judith knew she needed to get out and stay out, but her husband didn’t make it easy.

“He eventually found out where the shelter was,” she recalls “I stayed the whole day in the shelter because he stood all day next to his car, right across from the parking lot waiting for me to come out.”

When he finally left, one of the shelter attendants woke her up so she could move to another shelter before he returned. She would relocate to five shelters before she finally got away, and she ran up credit card debt to do it.

“I had to start over from scratch and credit cards were the only avenue for me to get things done. We had excellent credit,” Judith explains. At the second shelter, “I went down to our nearest bank, and they offered me a credit card with a $20,000 limit. That’s how it started.”

Judith struggled to get ahead and faced medical expenses as the result of the domestic abuse. According to the NACDV one in four women have been victims of severe physical violence by an intimate partner in their lifetime. Intimate partner violence accounts for 15% of all violent crime in the US. and costs $8.3 billion per year.

“I was living paycheck to paycheck,” Judith continues, “Then I was offered another credit card. I had to get some dental work done because my husband had knocked my teeth out.”

Judith finally left the fifth shelter and got her own apartment, but the escape had cost her. “I ended up $16,000 in debt. tried to keep up with my payments, but it had gotten to the point where I couldn’t even meet the minimum payments. I was drowning in debt and had that feeling there was no way out.”

Determined to repay what she’d charged, Judith researched solutions and found Consolidated Credit. A debt management program reduced her total monthly payments. In addition, by cutting her interest rates, she was able to get out of debt faster. And because she made the right choice to repay the full amount instead of settling, her credit score improved, too.

“One day, I took a good look at my account and said, ‘Oh my God! This is really getting paid off nicely.’ I started seeing the light at the end of the tunnel. Before consolidating my debt, my interest rates were as high as 24 percent. Some went down to as low as zero percent. I started out with a 532 credit score and now I’m at 776.”

Judith encourages women in the same situation to do whatever they have to do to leave.

“A lot of women don’t leave because they’re scared. A lot of it is financial,” she says. “But there are good people out there, people who donate things to you. Get down to the shelter, get some help, and they’ll open doors for you. It always works out in the end. I’m out and thankful for a lot of things. Starting over at 50 was hard, but without making this choice, I never would’ve discovered this company and how they could help me.”

Another type of economic abuse is called coerced debt

The NCADV defines coerced debt as “non-consensual, credit-related transactions in the context of an abusive relationship. Coerced debt destroys the victim’s credit rating, making it difficult for her/him to obtain future loans, rent an apartment and even get a job.”

“Unfortunately, I have to admit that I was in a bad personal relationship, where there was emotional and financial abuse,” Maria says. “I felt stuck and I also had a small child with special needs. I was manipulated.”

Maria’s boyfriend got access to her credit cards, quickly running up high balances that she couldn’t afford to repay. Before she knew it, the debt had ruined her credit, making it even harder to leave.

“I had several cards, some of which were already near their limit. A few were placed on hold due to late payments or not being able to meet the minimum payment requirement at all,” Maria explains. “At the start of the program my credit score was in the 400’s. It was so poor that I was unable to secure an apartment to move to.”

Maria’s credit counselor helped her find a payment she could afford even with her out-of-pocket medical expenses for her son. She started to pay off her debt which, in turn, restored her credit. In the process, Maria says she got her power back and the means to make a clean break.

“I can still remember when the first card was paid off,” she recalls. “It was such a feeling of empowerment. There is nothing to describe that feeling and it gave me hope to finally be able to transition out of a toxic relationship.”

With just four payments left in her program and her credit score up to 665, Maria was able to break things off and get an apartment.

“I am happy to say that I am living alone and was able to walk away from that relationship,” she says. “Giving my child a safe place to live is beyond what any and every parent strives for. Thank you so very much.”

“Debt caused by domestic and economic abuse is unfortunate and it happens more than people think,” says Gary Herman, President of Consolidated Credit. “But there is support available for abuse survivors who need help achieving financial stability. We’re proud to help all our clients find financial freedom, but it feels especially good in cases like these because there’s a much larger freedom at stake.”

If you or someone you know needs help with debt, talk to a certified credit counselor to find the right solution.