Home » Financial News » 74% of Americans are Getting Married with Debt

Research of the Week: 74% of Americans are Getting Married with Debt

And these couples aren’t doing themselves any favors starting their life together saddled with debt.

The student loan experts at Student Loan Hero took a break from their usual research to poll 1,000 couples who are getting married in the next 12 months. They wanted to know how these couples planned to pay for their wedding.

Almost three out of four engaged couples (74%) say they will go into debt to get hitched. Most (61%) will use credit cards to finance their nuptials. But with an average wedding price tag of $33,391, according to the wedding experts at The Knot, that’s a recipe for financial disaster.

And an overwhelming majority are budgeting.

In addition, these couples are already tapping their savings in an attempt to avoid debt. Seventy percent of the couples are using savings. It’s also worth noting that 51% of them have already delayed the wedding for financial reasons. Many have delayed getting married by a year or more, and yet they’re still forced to rely on debt to cover the costs of the ceremony.

Perhaps the most surprising statistic out of the survey? Less than one in four (23%) say they are very stressed or even somewhat stressed about the cost. That’s true, even though 38% agreed with the statement, “I can’t afford to pay for my wedding.”

“Many people dream of having the perfect ceremony, but a happy life together is more important,” says April Lewis-Parks, Financial Education Director for Consolidated Credit. “Financial stress is one of the leading causes of divorce. Starting your relationship with $10,000 or more in debt creates undue stress on your new marriage.”

Lewis-Parks says she understands why 63% of the couples surveyed have considered eloping. But that couples should keep in mind that it doesn’t have to be all or nothing. It’s encouraging to her that couples seem to have a good handle on where the largest costs are in the nuptials.

“The venue and catering tend to be the most expensive parts of the ceremony, even more so than the rings,” she agrees. “So, if you can find a creative way to cut those two costs, then you can save big. Consider going to a local public park or holding it in someone’s backyard. For food, if you do a brunch or a lunch reception, the food tends to be cheaper.”

Lewis-Parks says that couples who are willing to be flexible tend to have the easiest time-saving. The more you’re willing to go low-key on the arrangements, the less likely you are to face a huge price tag that winds up on credit.

“Intimate and casual can also make your nuptials more unique and special for everyone involved,” she encourages. “It’s more personal and you have more opportunities to make it unique and make it your own if you opt for something other than a traditional venue and catered dinner reception.” 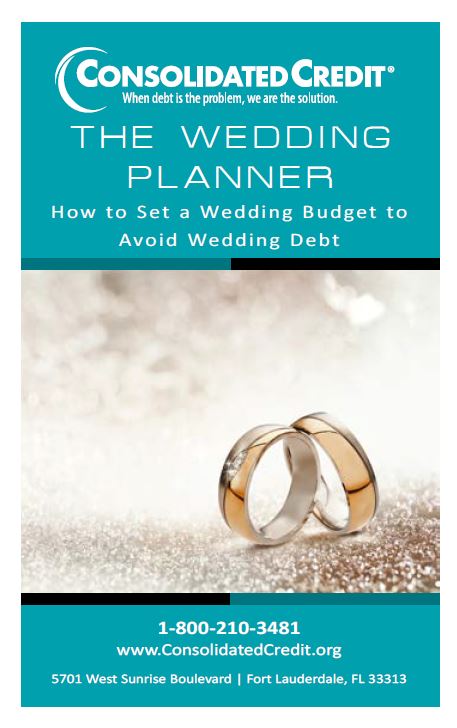 This is the ultimate wedding savings guide. It helps the bride and groom decide what is really important when planning their ceremony, reception, and future. It also provides the average cost of items nationally, so consumers know what to expect.

Major life events like weddings often lead to challenges with credit card debt. If you have debt to repay, take the first step together and talk to a certified credit counselor.